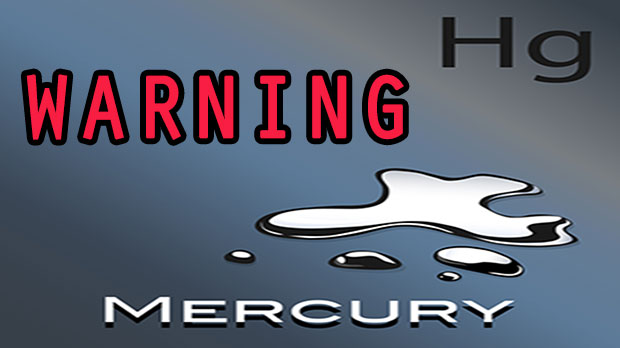 ‘MERCURY’: The accumulating ‘darkness’ behind skin-whitening creams By Ayesha Baig

Equating beauty with fairness has long dominated the mentality of people around the world. South Asia in particular, has seen the rampant quest for beauty and fairness which in turn has given rise to the mushrooming of skin whitening creams leading to disastrous results. The superficial adverse effects of such whitening creams are apparent and thus are given more importance but what has been largely ignored up till now is the accumulation of mercury inside the body which must be the real treat. How dangerous a toxin is to human health depends upon its concentration in human body and the frequency by which human is exposed to that particular toxin.

At present, researchers are paying attention towards the use of cosmetics and the metals which are present in them, considering them one of the major and potential sources of heavy metal accumulation in humans, particularly women. Despite the presence of Mercury – a toxic heavy metal in skin whitening creams; manufacturing of whitening creams and their purchase by public in the countries of Middle East, Asia and Latin America is on the rise. Use of whitening creams is considered to be a major source of chronic mercury poisoning in young girls of developing countries like Pakistan.

In Pakistan, a study conducted at ‘Dermatology Department of Nawaz Sharif Social Security Teaching Hospital’ affiliated with University of Lahore, reported the adverse impacts on face by the use of topical corticosteroids and fairness creams. A research investigation was also conducted by ‘Sustainable Development Policy Institute’ (SPDI) on the pervasiveness of skin diseases due to use of mercury containing whitening creams among the population at the selected cities of Pakistan. Recent surveys and studies in Pakistan suggest that whitening creams have caused facial abuse, acne, rashes and other adverse effects on the skin of the users. Few research work has been done on the ‘detection of mercury’ in those skin whitening creams that are generally suspected to contain mercury and have easy accessibility to a greater population. Alarming as it may sound, almost no prior work has been done in Pakistan on the ‘concentration of mercury’ found inside the human body through the application of skin whitening creams. 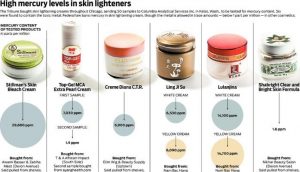 A three-day capacity-building ‘Mercury Inventory Using Toolkit of the United Nations Environment Programme (UNEP)’ was organised by Climate Change Ministry in technical and financial support with the UNEP and the Washington-based Global Environment Facility (GEF). Former Director-General of the Pakistan Environmental Protection Agency, Asif Shuja Khan said, “There is an urgent need to hammer out a policy mechanism that can help prevent unbridled use of the mercury.”

A widening gap between the use of mercury-containing skin whitening creams and public awareness regarding its adverse health impacts is ringing an alarm bell. Although Mercury and its salts, such as Mercurous Oxide and Mercurous Chloride, because of their adverse effects, are banned for use in cosmetics as skin-whitening ingredients. Still, the free-wheeling use of such dangerous creams by public is calling for the attention of state-machinery to intervene and educate the masses. Negating our skin-tone is synonymous to negating our existence. Therefore, efforts at individual level is a need of the time because as a society, we are also responsible for breeding a mentality which prefers ‘white’ over anything that is less than that.
……………………
The writer is an Environmentalist, MPHIL research scholar in Environmental Sciences. Areas of interest are Environmental Toxicology and Food Safety.

The views, opinions and work produced herein is the sole responsibility of the author. LEARN does not take any responsibility for any claims, rights or omissions from this work.