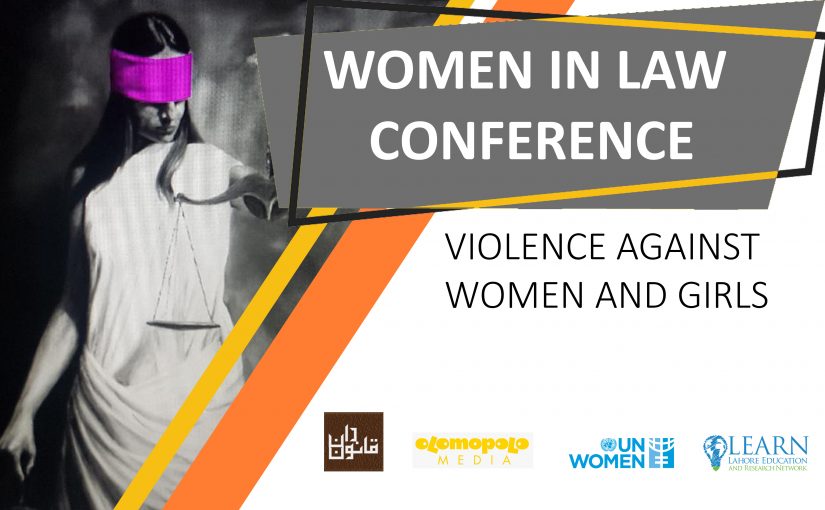 LAHORE: “Violence against women is not limited to physical wounds and abuse. It is more pervasive than our common understanding of it, because women are tortured not just physically but also psychologically and economically,” Nida Usman Chaudhary, founder of the Lahore Education and Research Network (LEARN), said on Monday.

She was speaking at the Women in Law Conference on Violence Against Women.

Chaudhary said women in many areas of Pakistan were still denied their right to vote and to have a voice. “They are deprived of their economic rights, their dower and their property. They are still objectified and disgraced for everyday choices such as what they wear and that despite there being legislation and international commitments many women in Pakistan still lack access to basic services such as education, health, police, justice and social support. All of this makes them more vulnerable and susceptible to violence.”

Chaudhry also explained that accessing justice could be traumatic for survivors of gender-based violence. She said it was imperative to adopt a multidisciplinary approach towards violence against women. She urged the legal fraternity to seek removal of hurdles in the criminal justice system, raise awareness and provide aid and support for victims.

“The issue is not one of lack of legislation but of implementation and social attitudes of people around us. For me, access to justice is all about giving space and creating an environment in which women feels safe to be and heard,”said Justice Ayesha A. Malik.

Addressing the need to sensitise the society and to work on social attitudes, she said, “Each one of us has a part to play, we are all part of a channel of communication and each and everyone is an agent of change … for a better tomorrow.”

While highlighting the trials and tribulations of the litigant in the criminal justice process, Barrister Salman Safdar stressed the need for more trainings and capacity building of medico-legal and investigation officers (IOs) because their investigation and reports are the foundation on which the prosecution’s case is built.

He said, “The system does not always understand the issue. Violence by family members is routinely termed as a ‘domestic issue’.”

He appreciated the role of the judiciary and prosecution, and said that the problem lied with the police department.

“The IOs lack expertise and competence and often they don’t even visit the crime scene before writing their report. This lapse in evidence gathering creates hurdles for the prosecution and judiciary, the judges are morally convinced but not legally.”

“The women face many hardships and for them even stepping out of the house to approach us for assistance has challenges and repercussions,” said Robina Shaheen, a women protection officer at AGHS Legal Aid Cell. She explained that women abused at home often have no place to go and they put their lives at risk to access justice. However, once they are told about the procedure and the questions they may have to face in open court and other forums, they often give up on their quest for justice, she said.

“Officers are not trained to collect circumstantial evidence in rape cases,” said Sohail Akbar Warraich, a member of the National Commission on the Status of Women. “Girls as young as 16 or under are referred to as being of ‘easy virtue’ or ‘habitual’ so their sole testimonies in absence of other corroborating evidence are often not relied upon in rape cases.”

He said, “efforts are often focused towards negating the case.” He highlighted the promulgation of discriminatory laws against women in the late 80s, and said that a common slogan by women’s rights activists at the time was ‘complaint becomes confession’.

“Violence may be direct or it may be structurally embedded in the system and the laws and cultural practices such as ‘wani’ or ‘swarah’,” said Dr. Rubina Saigol, an independent researcher and gender expert. Highlighting the existence of discriminatory legislation against women, she said, “law and justice are not always interdependent… discriminatory laws exist. Legislative measures cannot on their own end violence. We need long-term strategies.”

In order to address these challenges, the conference highlighted the existing state-run, judicial and private mechanisms of protection and the role of technology in promoting access to justice.

They maintained that the establishment of the dedicated Model Gender Based Violence (GBV) Court in November 2017 in the Sessions Court of Lahore has reimagined the system and is a step towards making the process more accessible for survivors.

“The whole set-up and environment of the GBV Court is developed keeping in mind the comfort and concerns of the litigants to promote access to justice,” said Judge Rehmat Ali of the GBV Court. “We have worked hard to implement the SoPs of the GBV court and now even police departments are establishing GBV cells in their stations to handle these cases with the requisite sensitivity and increased cooperation.” He said, “the IOs have been provided formal training, currently around 10 female IOs are working in GBV wings in police stations.”

“The Chief Minister’s Special Monitoring Unit will also be developing its own helpline under the Punjab Safe Cities Project with technical assistance from the PCSW,” said Fatima Khan from the CM Special Reporting Unit (SRU).

“Courting the Law is investing heavily into legal technological innovation to realise the right to information and access to justice. We are creating our techno-legal platforms such as the ‘Q and A App’ where legal queries can be sent through a mobile app. We have also launched mohtasib.pk through which online complaints can be filed with the Ombudsperson and our ‘Insaaf Camp’ initiative is aimed to create awareness of rights and legal processes in local language through social media posts,” said Farhan Shafi, a representative from Courting the Law.

Aliya Khan from Punjab Commission on the Status of Women (PCSW) said, “PCSW adopted Dar-ul-Falah and refurbished it to an upgraded rehabilitation and skill development centre. We focus on mental and physical health as well as vocational training for victims. The PCSW has a 24-hour helpline and is now working with Federal Investigation Agency (FIA) to counter cyber crime.” 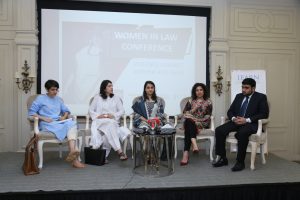 Hafsa Mazhar, the head of UN Women Office in Punjab, highlighted the role of her organisation in supporting on-ground initiatives and institutions to help Pakistan improve its gender equality index. “Pakistan currently ranks 143 on the global gender index, a lot of work needs to be done to create an enabling environment for women and breaking stereotypes,” she said.

The Conference concluded with the adoption of a resolution on gender-based violence by the Women in Law Initiative that called for, amongst other things, condemning violence of all forms, raising awareness and conducting trainings, eliminating taboo around seeking treatment or counselling for psychological suffering and for each one of the participants to play a part in ending gender-based violence. 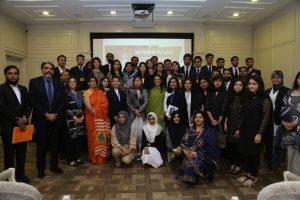