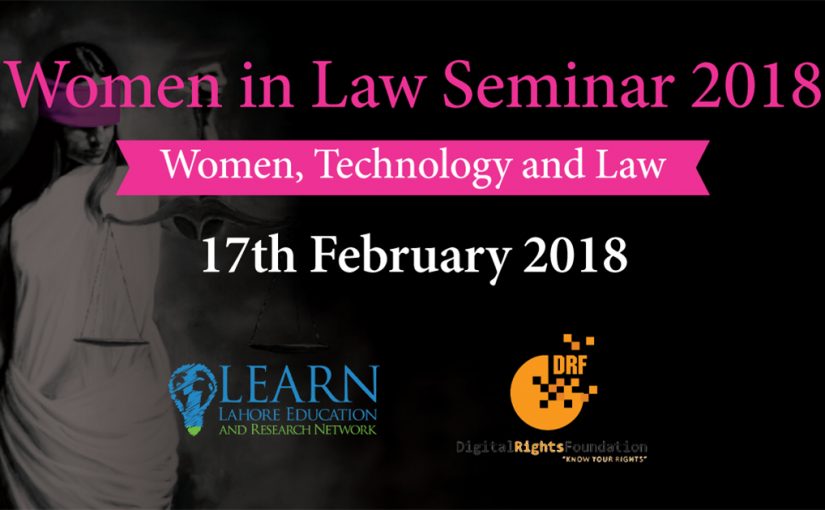 Press Release: The Lahore Education and Research Network (LEARN) held the Women in Law Seminar 2018 in association with Digital Rights Foundation (DRF) on 17th February 2018 at the Nishat Hotel Lahore.

‘Women in Law’ is an initiative of LEARN that was launched in 2016 to highlight and address the challenges and opportunities for female lawyers in Pakistan. Under this initiative the Network held three-part dialogue series in 2016 and followed up their work and research on the same with practical steps to build a stronger community of female lawyers, to connect and open channels of communication amongst them.

The seminar was jointly dedicated to the exemplary contribution of Late Ms. Asma Jahangir to justice, rights and cause of women with a heartfelt tribute by Ms. Nighat dad (Founder DRF) and Ms. Nida Usman (Founder LEARN).

Thereafter, Ms. Nida Usman provided a round-up on the work done so far on this front and the opportunity was taken to launch the first ever magazine dedicated to showcase the work and achievements of female lawyers in Pakistan – The Pakistan’s Women in Law magazine.

In connecting female lawyers across Pakistan, Ms. Nida stressed the importance of harnessing the marvels of modern technology as they themselves use technological platforms and social media to connect and provide a much-needed space to female lawyers for networking that was traditionally not accessible to them.

The Seminar then commenced the panel discussion on Women, Technology and Law to promote an understanding of digital rights and the role of women in utilizing technology for their work and networking and also how they could use it for advocacy of digital rights to reach the most vulnerable of all victims.

The session was moderated by Ms. Nida Usman Chaudhary.

The seminar concluded with a short workshop on achieving online security delivered by Mr. Hamza Ali and Ms. Nighat Dad of DRF. The participants were briefed on the fundamentals of online security, passwords and social applications that ensured data security.

The participants were then given a chance for an open floor discussion on women in law and digital rights and a chance to network with each other more informally over lunch.