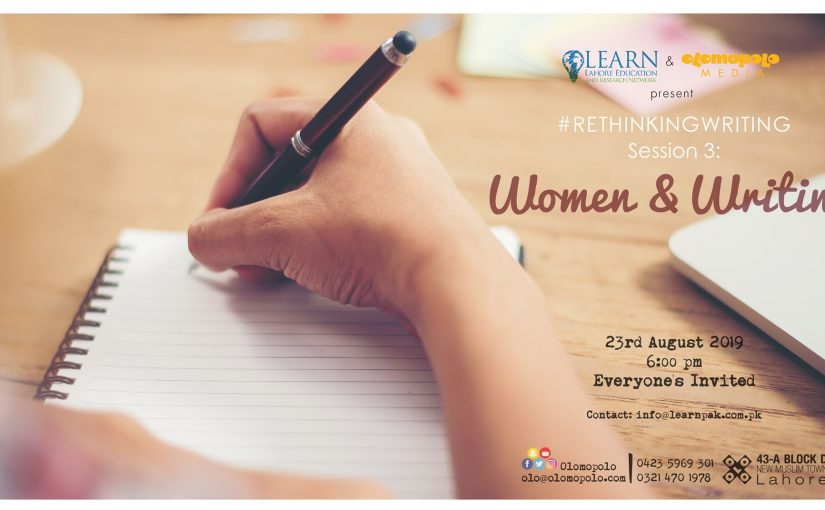 On August 23rd, 2019 Lahore Education and Research Network (LEARN) conducted the third session of their ‘Rethinking Writing’ Initiative in association with Olomopolo media in Lahore.
The session aimed to focus the particular challenges faced by women as writers and why it is important for them to continue to write and reclaim their space nevertheless. The driving question behind the session was whether writing was a means to counteract erasure and if so, how can women continue contributing their voice to their issues for their cause? 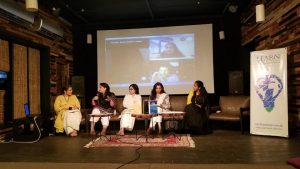 Ms. Waiza Rafique, who herself is a poet and has recently started writing in addition to her day job as a lawyer and whose work has been published by ‘Rekhta’ and who is a member of LEARN and part of the Rethinking Writing Initiative, opened the session with her welcome note and introduced the panelists. Thereafter, Ms. Nida Usman Chaudhary, founder of LEARN and its various initiatives commenced the session with a tribute to the legendary ‘Toni Morrison’ who passed away on 5th August 2019, leaving behind a legacy of her own.

She personified the essence of the session on women in writing and has been a source of inspiration and reflection for most writers after her. In particular, her contribution to her community of African-American writers and in giving them a voice of their own lies her true contribution and also helps us understand why it is so important for people from marginalized groups and communities, including women to reclaim the platforms which can be their voice and the window for the world to see their journeys, their stories, their struggles, their triumphs and their successes.

In honouring Toni Morrison, a short video presentation of her most inspiring quotations from her celebrated work was shown. Such is the power in writing, it transcends boundaries and geography, race and nationhood and truly connects the person reading to the emotions common to us as humans. In this way, writing brings down barriers.

The session was divided into four sub-themes including, Women and Creative Writing, Women and Media, Women and Journalism and Women, Literature and Performing Arts.

The conversation opened with Ms. Nida asking Ms. Sana Munir about what motivated her to write and in particular, what was the inspiration behind her columns on Mughal Women for a national newspaper to which Ms. Sana replied,

“my curiosity in digging out the stories of Mughal women arose when I visited the old historical buildings in and around Punjab. There was hardly any story being told about Mughal women and even in the history books their role was reduced to being, at best a ‘love interest’ of the Mughal princes and kings. Clearly, their entire legacy as people, as persons, as humans had been erased or never documented. The women were much more than an eye-candy and so I felt as a woman, as an author it was important to represent them and their true achievements because history had not done justice to them, their contribution and their achievements.” 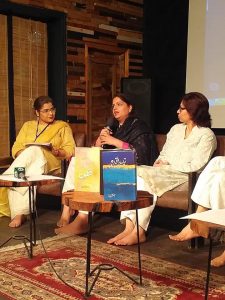 Ms. Naima Rashid, who translated Parveen Shakir’s poetry in English in her book, “Defiance of a Rose” held similar views when asked why she decided to translate Parveen Shakir’s work into English. In addition to the obvious answer of accessibility of her work to people who could not understand the language of the original work, Ms. Naima shared a very thought-provoking observation about Parveen Shakir’s perception and the actual scope and sphere of her work. She argued that Shakir was always portrayed as a poetess who wrote about love and emotions, whereas the multifaceted layers of her work in other streams and aspects was also a victim of the similar kind of erasure that Sana talked about. She felt it was not just to let that perception continue about someone as versatile and diverse as Parveen Shakir and so as her fan, as a woman she felt she should translate and bring focus on those works of the late poetess to do justice to the true essence and sphere of her work. She believes translation can be a means to fight war against amnesia and help highlight those aspects of women’s work and their contribution to the society that have traditionally been sidelined.

On the side of journalism, Ms. Sana Asif Dar expressed her concerns over the gender stereotypes that persists in her field and in the challenges she faces at work. She highlighted how it is presumed that she would cover stories that are considered softer or weaker such as those related to domesticated, family, or women and children related issues or lifestyle, fashion and showbiz related news while the ones considered more serious or critical such as current affairs, economy, political scenario, terrorism and international relations be reserved for male correspondents to cover. She also highlighted the challenges of working conditions and lack of safe transport which limits her possibilities as a female journalist in a country like Pakistan where social conditions are not conducive for women to be in the field. Another point she highlighted was that very few women were operating at decision making levels in her profession and that affects the kind of stories that get picked for broadcast or publication, in that, women-centric concerns may not get as much attention as ideally desired.

This was a point that was further illustrated by Ms. Sabahat Zakariya who shared her experience with us and said that there was once a book she pitched to various contacts and people in the publishing industry as well as among her circle and colleagues. What intrigued her was the common response that was coming from men and women towards the importance of publishing such a book at all where in the women considered it very important while the men, not so much. It goes on to show that female voices are lacking at the top where the decision making takes place and that is why stereotypical notions and gender roles in our content continues to be perpetuated and characters like ‘khirad’ continue to glamourize a subservient eastern woman as the ‘good’ woman and vilifies the one who can speak up as ‘the bad’. Our neighbours have increasingly experimented with powerful scripts, with powerful female characters and have explored digital platforms as well as the more traditional cinema and TV channels to bring progressive content, even path-breaking content which helps to reform the society’s narrative of the helpless princess in need of knight in shining armour to one that is more in tune with the modern-day woman who is a person in her own right. Sabahat stressed that it was not enough that more women write and reclaim space in this industry, but that it was important that whichever gender does fill in that role, is a feminist in his/her approach to expect a change in real terms and to make a move towards empowering and a progressive narrative building re women.

In addition to erasure as a challenge, journalist Shabana Mahfooz highlighted other challenges that women writers face in Pakistan by virtue of a patriarchal set-up of the society and stated that it is more challenging for the woman to be able to write when she wants to and how she does because she is expected to be available for her domestic responsibilities prior to her taking the time out for any ‘interests’ she may have including writing. In that, it is more difficult for her to get recognition as a professional writer as compared to her male counterparts. She however very rightly stated that there were some feelings and experiences which women face and those experiences can be better expressed by women themselves, such as child birth, pregnancy, miscarriage, domestic violence or even love for that matter, in that, in the way she perceives it or feels is, is going to be very different from a male counterpart so it is important that all aspects, all expressions find their way to people and the readers have a spectrum of voices to connect to.

Ms. Nasira Zuberi, an esteemed poetess and a media person who has been behind launch of two news channels in Pakistan added that women should be encouraged to see beyond their gender and be trained to view themselves as professionals to be able to bridge the gaps that may persist in their writings, in their content or in them facing their challenges in practice. Given the many avenues that have opened up in modern day and age, it is not possible any more to suppress a voice that dares to take a stand. She encouraged young writers to explore writing outside their comfort zones and to hone their skill through practice, consistency and commitment. From her point of view,

Pakistan has come a very long way and that there are many women who are now part of the industry and not just in the showbiz, media or writing, but in departments, in all professions, women have made their presence felt and are doing remarkable work.

She believes that while advancement is clearly needed in terms of increased slice in decision making, women’s courage, persistence and their presence is already a very encouraging trend that needs to be applauded, supported and encouraged. She ended her conversation with her poetry she wrote for women’s day on the juggling that women must do in order to go forward.

To close the conversation, Waiza Rafique shared the message her mentor taught her and said that, “writing, or any other form of art for that matter, chooses hearts itself.” The session ended with a recitation by Mr. Ali Mazhar from ‘Ain Adab’, who had also written a couplet in honor of women for women’s day 2019, the text for which is as follows: 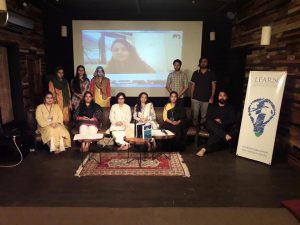