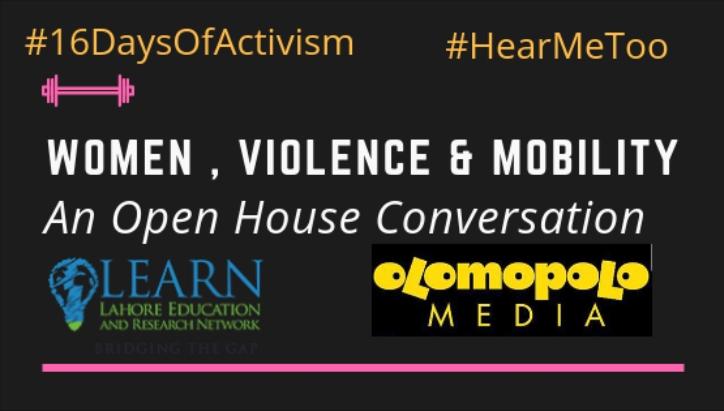 On Friday Dec 7th, 2018, Lahore Education and Research Network (LEARN) conducted a very engaging session in relation to #16DaysOfActivism for ending gender based violence in association with Olomopolo Media in Lahore. 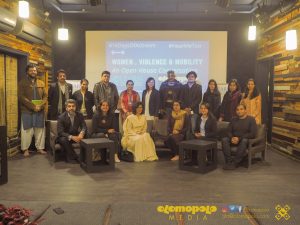 The theme on which we decided to focus on was ‘Women, Violence and Mobility’ in order to shed the light on the challenges while commuting faced by women and vulnerable groups and how that in turn consequently affects or undermines other rights that they have in the constitution such as their right to work, their freedom of movement, access to basic facilities etc.

We had an open-house styled panel discussion where our speakers engaged in a two-way dialogue with the participants and shared not just their stories and experiences but also insights from their work and initiatives that they have undertaken on their own accord to bring awareness on women’s right to mobility and their right to be in public spaces.

The session was moderated by Nida Usman Chaudhary, founder of LEARN who in her introduction laid down the issue in its context and spoke of challenges to mobility in the wider environmental context also, suggesting that if an enabling and safe environment were to be created in the country it would add to raising the standard of living and improve air quality as well. Making cities safe for women therefore, had wider implications as the issue was connected to creation of an overall environment that is sustainable.

She said, “In making safe cities for women, we end up making safe, progressive and efficient communities for all”. 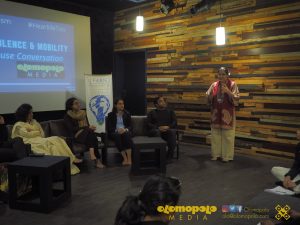 Rafay Alam then initiated the conversation by explaining how mobility was actually an entrenched right in the constitution under Article 15 (freedom of movement) but how that was currently being interpreted very narrowly in context of Exit Control List only. In Pakistan, women are forced to work to make ends meet. He highlighted that there were staggering cases of assault on women during commute but that nothing was ever done to make the space any safer for women. The numbers of violence and reported cases only keeps rising every year. He recounted the harrowing Delhi Bus Rape incident that jolted the world and added that no country can progress if half of its population cannot go out and access work, healthcare, education and other services because of a disabling environment.

Aneeqa shared her harrowing incident of harassment and assault she faced when she decided to go out cycling on her own in Lahore in 2016. She explained that the reason it was so easy for the perpetrators to knock her over was because they knew they could and would get away with it and they did. She also highlighted how she faced secondary harassment at hands of people on social media who would resort to blaming her for the incident by suggesting that she should not have gone out cycling alone in the first place. This type of victim blaming is exactly what causes shrinking spaces for women in public sphere in the first place. She expressed that even though she received a lot of support, it was comments like these that propelled her to continue to talk about her experience so that more awareness can come and women can access their right to be.
She further stated that, “no one is going to come and give us this right, we have to take it ourselves” and added that, “those who take the initiative often face the repercussions, but they are the ones who pave the way for others.”

She also spoke how her travel business was breaking stereotypes in this regard as adventure travel in Pakistan has not seen many female entrepreneurs in the lead. However, she explained that her being at the helm of the affairs encourages more women to sign up for the trips because they feel more comfortable in the thought that a woman is organising it. She plans to develop capacity of more women tour guides and reclaim space for women in the tourism industry.

Aysha didn’t start cycling as an activist but simply because it made more sense to her as a mode of transportation given her experience of living abroad. She felt she was more connected to the community she lived in and was actually looked upon with reverence by the street vendors and guards on her regular route who appreciated her courage and related seeing her on the same transport as in use by them. Her being on a cycle sent a message of equality. She made a very interesting observation about urban cities whilst contrasting them with ‘mohallas’ and stated that, “the higher the walls of our homes, the more dangerous the city is because you are not engaging with your environment at all.”

Aysha shared that she stopped cycling mainly because of dangerous air quality and unsafe roads highlighting a bigger challenge re mobility in the country. “The ‘car raaj’ and the signal free corridor stopped me from cycling because it became too dangerous. I stopped cycling not because I was a woman, but because as a cyclist, as a person on a bike, I had no road equity” she said.

Noor Rahman shared how she was perturbed by women not being able to be out on the streets and just relaxing or just existing. She noticed that women in Pakistan would use the streets only to commute from point A to B but never for recreational purposes unlike men who are often seen loitering around ‘dhabas’ and other open spaces.

“Why can’t you just go and exist?” she questioned.

This thought led her to explore what opportunities prevailed in the society for women to be in public spaces and she was introduced to ‘girls at dhabas’ who had a lot in common in terms of their concern for lack of access to women in public spaces. They therefore, decided to hold public rallies under the ‘girls on bikes’ initiatives to reclaim public spaces for women. They have hosted three rallies so far and the number of participants has gone from 30-40 in the first year to 70-80 in the last rally they held.

She closed her comments by highlighting the negative role the media plays in projecting them as ‘manchali larkiyan’ whenever these rallies are covered in the press. She requested the media to play a more responsible role towards reporting and creating awareness so that the message in its true sense can be carried forward in the dignity with which it ought to be viewed.

From minor challenges such as figuring out what to wear, to how to reclaim the right for women to be in public space to just be and enjoy that experience, these women are breaking all stereotypes and glass ceilings. They now expect their male counterparts to stand in solidarity with their right to a safe space and to approach any violence being perpetrated with zero tolerance policy and to start with calling it out wherever it is seen.

The study by Centre for Economic Research and Practice (CERP) is most interesting as it explores how improving mobility can increase participation of women in labour force. Their work was represented by Uzair Junaid who discussed the findings of their study in depth. The many respondents that they interviewed revealed that mobility was a significant factor hampering their access to workforce and that they would be more willing to work if they had such an access. 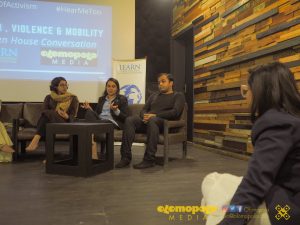 Uzair said, “availability of transport increases the chances of women joining the labour force. We could double the number of women who can work by ensuring their right of mobility.”
The pink bus alone was not a viable option because there were not enough passengers to fill the bus to its viable capacity and recommended that in place of that smaller vans could probably be promoted as women only transport to encourage participation of women in workforce.

Although, harassment was not significantly covered in their research, it is believed to be a strong factor in hampering access to public transportation so there was a clear need to have a fix bus schedule with proper route maps so that women spend less time waiting for busses at the stops. The bus stops need to be made safer by providing proper lighting and security. 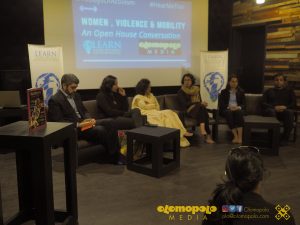 In continuation of the same thought, Fatima Khalid highlighted the importance of their women on wheels campaign to suggest how important it was for women to have access to this mode of transportation that the lower and middle class in Pakistan was a majority user of. She shared that the first women safety audit revealed that 90% of the women felt unsafe during commute. The Government of Punjab therefore, was keen on taking ownership of the issue and provide a viable solution to the women. They had the vision to liberate women by providing them the freedom and independence by relying on their own mode of transportation instead of having to depend on their male relatives to go from one place to another.

This empowered women in more ways than one as they could now access work and colleges and other opportunities that were previously not opened to them. Great care was taken on their part to engage the traffic police Lahore in imparting the training to use the motorcycles in association with Honda Atlas who also agreed to provide after sale service to the women trained under this programme.

A member of the audience questioned where the women on bikes and on wheels go after the one day of the rally that they are seen participating in and how can this become a regular accepted mode of transport for women in Pakistan. The panellists were keen on asserting that change is gradual and slow but conversations and efforts like these should continue to change that mind-set. 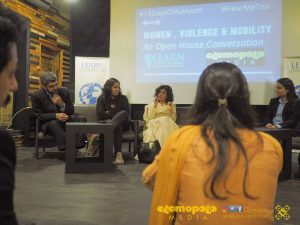 The audience also highlighted that there was a need to integrate the various transportation options existing in Pakistan because they all operate in alienation and often in competition with each other, unlike in Dubai where feeder busses take passengers from housing societies and other vicinities to metro stations which is then further inter-connected to other main shopping, educational, cultural, medical and other important points in the city, from where additional transport such as taxis may be easily accessed and explored.

With initiatives like ‘girls on bikes’ and Punjab government’s ‘women on wheels’ the capacity and reclaiming of roads has begun but all participants and even members from audience agreed that more work on changing the perceptions and mind set of the population was still left to be desired. Aysha suggested that one way to make way for road equity was to start by celebrating car free days within the year.

It was encouraging to see the participation by men in this dialogue who had come forward to learn about these initiatives because they want their daughters to be a part of an inclusive society. 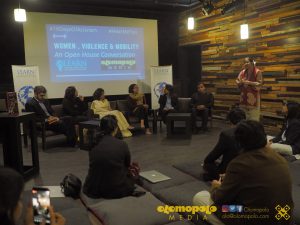 We would like to thank all panellists and members of audience for attending the session and making it so engaging and insightful. We would also like to express our gratitude for Olomopolo Media for hosting our talks and to Vicky for the official photographs.

For comments and feedback please write to us at info@learnpak.com.pk