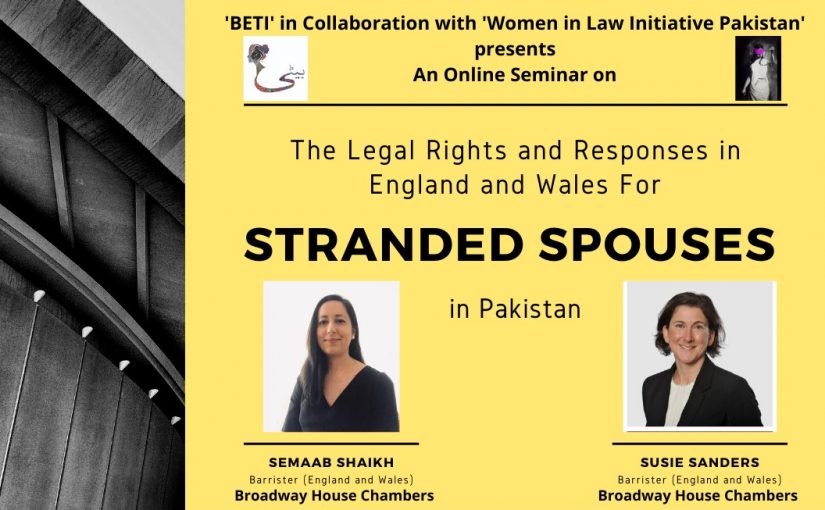 Press Release: Legal Rights and Responses in England and Wales for Stranded Spouses in Pakistan

Thursday, 4th June 2020: Women in Law Initiative Pakistan in association with BETI organised an online session on the legal rights and responses in England and Wales to stranded spouses in Pakistan. The session was led by Barristers Semaab Shaikh and Susie Sanders from Broadway House Chambers, UK.

Barrister Semaab opened the session with a definition of a ‘abandonment’ as laid down in the Practice Direction 12 J of Family Procedure Rules 2010 and highlighted the gendered aspect of the definition explaining that it only applies in the case where a husband who is a UK national abandons his foreign national wife in order to prevent her from asserting residential or matrimonial rights in the UK.

She also highlighted that the spouses most vulnerable to abandonment are those who have suffered some form of domestic abuse and retention of their passport and other documents by their in-laws or husband. These are typically the spouses who are financially and otherwise dependent on their husbands for their accommodation and immigration status and who may have little or no English language skills which makes them more susceptible and vulnerable to such abuse.

The immigration rules in UK currently have limited rights for spouses who may be victims of domestic abuse in UK. The concession allows survivors of domestic abuse to apply for indefinite leave to remain however, such a concession is only available where the applicant is in UK and must show that the relationship broke down as a result of the abuse suffered. Stranded Spouses in jurisdictions outside of the England and Wales, such as when wives are abandoned back in Pakistan, have no rights to access this concession even if they have children or financial resources in the UK.

The approach of the family courts, particularly of Mrs. J. Hogg in leading cases suggests that the courts are more open to considering the peculiar position of stranded spouses and have pleaded to the immigration authorities to allow the mother to enter the country for the purposes and duration of proceedings in the family court at least.

The speakers then spoke about their own recommendations on what needs to change within UK so as to make the legal position better for stranded spouses such as for instance ensuring that abandonment is recognized a s a form or type of domestic abuse within the definition of domestic abuse in the proposed Domestic Abuse Bill. The speakers also highlighted what lawyers based in Pakistan could do to assist such clients from Pakistan; in particular, Barrister Susie laid stress on the need to create awareness in Pakistan among women BEFORE they get married to foreign nationals so that they are aware of their rights, legal position and remedies to access justice. Writing letters to MPs in UK and explaining the legal position and factual circumstances of the victims was also recommended.

There is clearly a need for more cooperation amongst the agencies in both countries for meaningful assistance to be provided to the affected persons in such scenarios. 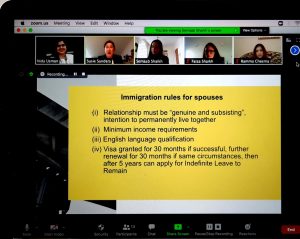 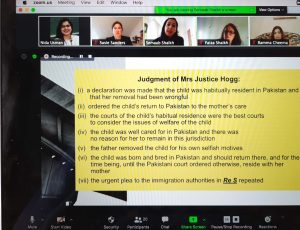