Initiative launched in Lahore to Rethink ‘Writing’ as an Industry

To celebrate the world book day 2019, Lahore Education and Research Network (LEARN) in association with Olomopolo Media launched an initiative to ‘Rethink Writing as an Industry’ with a panel discussion in Lahore on Thursday, April 25, 2019. 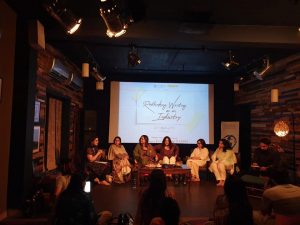 The discussion aimed to focus on the challenges faced by writers and publishing houses in Pakistan and attempted to address the important question of what the stakeholders both, within the government and from the business and trade community could do in order to promote it duly as an industry.

“We must ask ourselves if Pakistan is losing out on an entire industry and revenue by not investing in its writers and therefore also losing out from capitalizing on related industries such as showbiz?” said Nida Usman Chaudhary, founder of LEARN. “The west and Bollywood have both been able to gain a lot in terms of box office revenues from movies and series which have been based on novels. We have seen a trend of such movies doing superbly well at the box office and their resulting contribution to the GDP. There is therefore, business potential in ensuring that the world hears our stories and falls in love with them as well.” She added.

The event opened with a recital of original verses by lawyer, poet and a member of LEARN Waiza Rafique, through which she paid a tribute to the authors of the sub-continent.

The panel of speakers included Faiqa Mansab author of ‘This House of Clay and Water’, Laaleen Sukhera, editor and co-author, Austenistan, Zarminae Ansari, founder of ‘Joy of Urdu’, Naima Rashid author, poet and translator, Shabana Mahfooz journalist, trainer and content writer, Zahra Ali Khan writer and lawyer and Awais Khan founder of the Writing Institute. The President of the Women Chamber of Commerce and Industry, Faaiza Amjad was the Guest of Honour.

“There are no literary agents in Pakistan and our writers are under-represented in the global market” said Awais Khan through a video message.

Further challenges faced by writers were highlighted by the speakers as well as by the members in the audience who shared their own experiences of lack of opportunities and information on how to proceed forward with their creative work. “No formal trainings or resources were tere to guide or channelize those who wished to pursue creative writing” said one of the members of the audience who uses a digital platform to publish her work.

“There is no institutional framework or platform through which the work of our writers can be facilitated and promoted in foreign markets. The government and the chamber of commerce should facilitate through subsidies” suggested Faiqa Mansab.

“Producing books of international quality is also a challenge because printing paper and cost of doing business is very high in Pakistan” explained Laaleen Sukhera.

On the lost opportunity to capitalize on the demand in international markets of Urdu, Zarminae Ansari said, “There is no research or effort into promoting Urdu as a language to foreign markets possibly due to lack of appreciation and understanding towards the demand for Urdu that exists outside Pakistan.”

“There is a lot of work that goes into a translation to ensure that the true meaning of the author’s work is not lost in translation, but currently, there is no respect for the work we do as translators.” said Naima Rashid.

“It would be hypocritical of us to try and inculcate love for reading in our children if we are unable to show them a future in and through writing.” stated Nida Usman.

The event closed with a recital of ‘kitabein Jhankti hain’ written by Gulzar saab and performed by Ali Mazhar of ‘Ain Adab’. 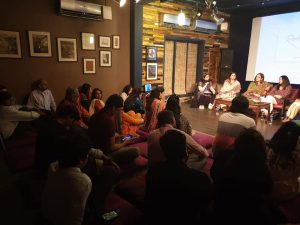